An improving picture for house prices?

House prices remain quality dinner party conversation, with the threat of a hard-Brexit causing many homeowners to stay put.

The lack of buyer or seller activity in the housing market appears to have suppressed the growth in values in recent months. But the latest figures suggest an improving picture. 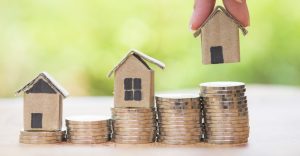 According to the latest Halifax house price index, average prices were up by 1.1% last month. This increase compares favourably with the 1.3% fall in average prices in March.

When viewed quarterly, average prices rose by an impressive 5% compared with the same period a year earlier.

For the quarter between February and April, house prices rose by 4.2% compared to the preceding three months.

A decade earlier, in April 2009, average house prices stood at £154,663. This time was a low point for house prices, following the global financial crash of 2008.

It would be remiss of us not to point out that past performance is no guarantee of future returns, whether in respect of property prices, investment markets, or any other asset value.

What goes up can also go down. Homeowners have become used to healthy house price rises during the past decade, but history tells us that these things tend to operate in cycles, with periods of growth followed by periods of recession.

We cannot however accurately forecast the timing of any future reversal in fortunes, and over the long-term, we would expect to see the value of property continue to rise, despite some short-term corrections.

Looking at the latest survey data, it’s worth noting that the most recent 5% rise in the annual growth figure in April is against a backdrop of exceptionally low house price growth during the corresponding period a year earlier. This period of low growth has an impact on year-on-year comparison figures, so you should consider its influence on the statistics.

There was also a notably high period of growth in February this year, with a higher volume of London property sales taking place, and a large number of sales of more expensive new build homes.

“The average UK house price now stands at £236,619 following a 1.1% monthly rise in April, as demand and supply of housing remained subdued for another month.

“The index has seen a weaker pace of growth over the last three years, which is consistent with the easing of transactions volumes and housing market activity reflected in RICS, Bank of England and HMRC figures.

“Looking further back, this April also marks 10 years since the lowest point of the Halifax house price index following the financial crash in 2008. Over the past decade annual house price growth has seen the average price increase by £81,956, or an average rise of 4.3% each year.”

How the UK housing market will perform for the remainder of this year is likely to depend, to a large extent, on progress with Brexit negotiations.bRe

Our clients and local estate agents tell us that decisions to buy or sell property are currently on hold, in many cases, pending a resolution to Brexit.

The threat of a no-deal Brexit, now diminished following the recent six-month extension to the Article 50 process, has unnerved some parts of the property market, who fear adverse economic outcomes including higher interest rates and a sharp property market correction.

It is, of course, impossible to know for sure how Brexit or house prices could pan out in the short or longer-term.

For the majority of homeowners, their property is a place to live in the first instance, with its value a still crucial secondary consideration.

Travel Planning Service – How does it work?