When we meet a new client for the first time, one of the main concerns, driving their need for expert advice, is tax. And specifically paying tax charges for exceeding limits on pension tax relief.

This issue is also mirror up and down the country, with recent figures suggesting it’s on the rise. It’s perhaps unsurprising to see these numbers increase, as limits on pension tax relief have been falling considerably in recent years.

When first introduced, the lifetime allowance for pensions stood at a generous £1.8m.

It has since fallen to £1.03m, although some pension savers have transitional protection in place to freeze their individual lifetime allowance at a larger amount.

The lifetime allowance is a limit on the amount of pension benefit that can be drawn from pension schemes – whether lump sums or retirement income – and can be paid without triggering an extra tax charge.

For pension savers subject to the main annual allowance on pension contributions, this has been cut from £50,000 when first introduced to £40,000 today.

Higher earners have seen their pension annual allowance tapered down to as little as £10,000 from the start of the 2016/17 tax year.

For every £2 your ‘adjusted’ income (essentially your net income plus pension tax reliefs in that tax year) goes over £150,000, your annual allowance for that year reduces by £1. The minimum reduced annual allowance you can have is £10,000.

And for those subject to the money purchase annual allowance, this has been cut from £10,000 to £4,000 a year, severely restricting how much can be contributed to a pension pot. 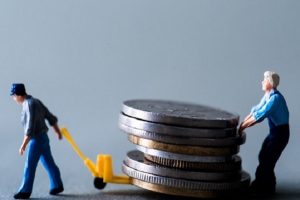 If you start to take taxable income flexibly from a defined contribution pension, the amount you can pay into a pension and still get tax relief reduces. This is known as the Money Purchase Annual Allowance or MPAA.

The figures showing more people paying a penalty for exceeding the annual allowance reveal 16,590 people paid a tax charge through their self-assessment tax return. This rose from 5,430 from a year earlier.

The amount of pension contributions made in excess of annual allowances rose from £143m to £517m, most likely the result of a delayed impact of the annual allowance being cut from £50,000 to £40,000, but also coinciding with the first year of the tapered annual allowance of as little as £10,000.

Such delays suggest that the number of people paying tax charges for exceeding annual allowances could continue to rise in the future.

In respect of tax charges paid for exceeding the lifetime allowance, the official figures for 2016/17 show 2,120 people paying these charges. This was up from 1,180 people the previous year.

The amount raised from these charges relating to exceeding the lifetime allowance rose from £66m to £102m.

Commenting on the figures, Steve Webb, Director of Policy at Royal London said:

“We are now starting to see the multiple cuts to pension tax relief bite on pension savers.  Although relatively small numbers of people are affected, the tax bills are huge.

“On annual allowance charges alone, the amount of contributions which exceeded the annual limit trebled in a single year up to 2016/17.  These impacts will get bigger as the ability to carry forward higher unused allowances from previous years works its way out of the system.

“Regrettably, the Chancellor will be looking at these figures with great interest as they suggest that pension tax relief could be a rich source of additional revenue for a cash-strapped government.”

The rising number of people paying these tax charges for exceeding pension tax relief limits is a good reminder of the importance of seeking professional advice.

Before making pension contributions or taking pension benefits, you should speak to a regulated and independent financial adviser.

If you would like any more information, or wish to discuss a tax planning issue of your own, please contact us on hello@longhurst.co.uk

A PENSION IS A LONG TERM INVESTMENT, THE FUND VALUE MAY FLUCTUATE AND CAN GO DOWN. YOUR EVENTUAL INCOME MAY DEPEND UPON THE SIZE OF THE FUND AT RETIREMENT, FUTURE INTEREST RATES AND TAX LEGISLATION

Longhurst commits to the HM Treasury Women in Finance Charter